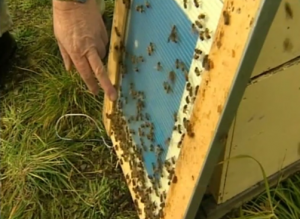 The science behind Bee Venom is still developing and researchers continue to find new uses for it. We add small quantities of Bee Venom to Manuka Honey to create our hugely successful Nectar Ease product range and this also forms the basis for our Royal Nectar skincare range.

Bee Venom composition and strength varies between Honeybee species and small variances are identifiable between bee breeds and locations.

Bee Venom’s unique composition has multiple effects on the body. The natural components of Bee Venom have been isolated and studied scientifically and one of the most important components has been identified as Melittin. Making up about 50% of the Bee Venom.

Here at Nelson Honey we use Bee venom in two ways and have become famous for our innovation with this ingredient.

We started adding Bee Venom to honey over 3 decades ago after feedback from beekeepers about its success in supporting an active lifestyle.  A range of Nectar Ease products was formed with our original Bee Venom and Manuka Honey, Nectar Ease, gaining a reputation in New Zealand for providing a joint health product in a tasty format.

Nectar Ease honey was originally used as a facial treatment gaining worldwide media attention from which our Royal Nectar skincare range was born.

Today the Royal Nectar skincare range has a strong following and is particularly famous with Asian consumers.

The Bee Venom used in Nectar Ease is extracted exclusively from the Apis Melifera species of Honeybee. Bee Venom is extracted from Honeybees using low voltage electrical stimulation. Beekeepers use a so-called collection frame that has wire electrodes installed that have a low electrical current running through them on a glass base, just like in the picture above. These frames are installed in honey hives and bees that come into contact with the wire electrodes will receive a small electrical shock. This causes bees to sting the glass, releasing the venom without losing their barbed sting (which usually results in bee deaths).

Once the collection process has finished, the Bee Venom dries on the glass, then the whole frame is transported to a laboratory to collect the venom.

The National Center for Biotechnology Information (NCBI) offers a great source of published research (scientific evidence) about Bee Venom. Below are links to several interesting articles.

The beneficial effects of honeybee-venom serum on facial wrinkles in humans. http://www.ncbi.nlm.nih.gov/pubmed/26491274

Scroll to top
The spread of COVID-19 globally has led to reduced airfreight capacity and, more recently, stricter lockdown restrictions within specific countries, causing delays to parcels coming in and out of New Zealand. We expect delays to continue for some time. Thanks for your patience.